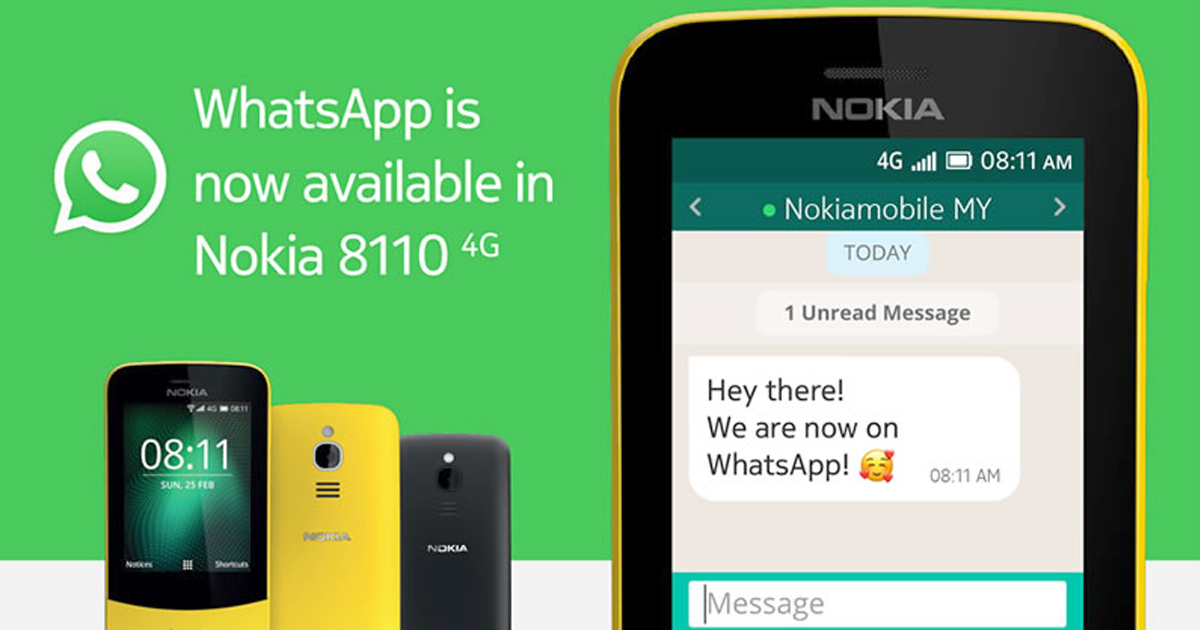 WhatsApp is available on Nokia 8110 and other smartphones from KaiOS. The nostalgic feature of Nokia’s phone becomes a modern twist. After a release in India in April, WhatsApp is coming to the western variants of the Nokia 8110. KaiOS users in the West can now download from the KaiStore an official version of WhatsApp. This means that owners of the retro-looking Nokia 8110 can access the chat app–it can only be downloaded from KaiOS devices with 256 MB or 512 MB of RAM.

The nostalgic feature of Nokia’s phone becomes a modern twist

WhatsApp’s KaiOS version promotes calling, messaging, and even end-to-end encryption, according to The Verge. WhatsApp will also be pre-installed from the third quarter of this year on select KaiOS devices.

For some Western users, adding WhatsApp to KaiOS may not make sense. Often phones such as the Nokia 8110 are owned as a manner to disconnect from social media and modern applications such as WhatsApp. But that’s not the case in India.

In India, devices that feature cheap and long battery life are much more prevalent. WhatsApp’s addition gives users access to a communications service that is highly common in the nation but was earlier reserved for smartphones.

The Cat B35, Doro 7060, JioPhone, JioPhone 2, MTN Smart and Orange Sanza are accessible together with the Nokia 8110, WhatsApp for KaiOS. WhatsApp came back in September on the JioPhones – well ahead of the Nokia 8110 April launch.

KaiOS is an incredibly light-functioning operating system accessible only on a restricted number of phones. The OS started as a fork of Firefox OS before its phone plans were abandoned by the famous browser manufacturer. KaiOS eventually gained investment from Google as well as using Google’s powered voice-typing assistant.

Also Read: These two new Nokia smartphones will be launched in August

The news follows the launch of fresh phones features Nokia 220 and Nokia 105. On Wednesday, the two new feature phones were revealed, targeting the market’s extremely inexpensive end. While feature phones are a rarity in developed parts of the recent world market research suggests that global “smart” feature phones, like Nokia’s, are actually one of the smartphone market’s fastest-growing segments.