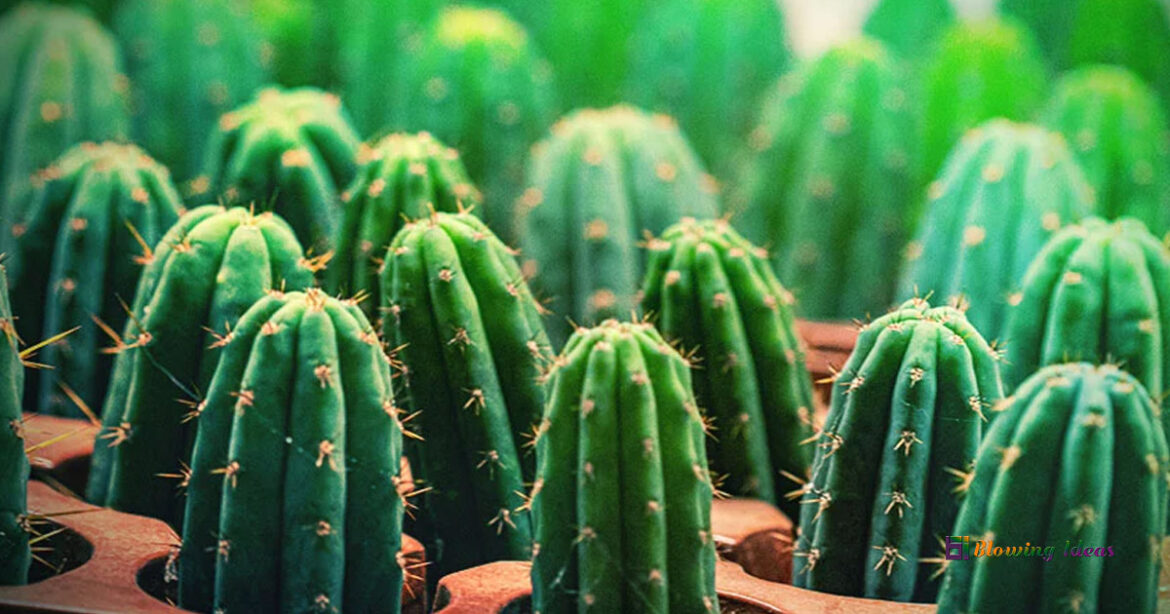 The well-known cactus Echinopsis pachanoi (syn. Trichocereus pachanoi) is also known as ‘San Pedro.’ This cactus is very popular, and you’ve probably seen it around we often keep it in stock, but there’s so much more to learn if you dig deeper.

Echinopsis pachanoi thrives in rocky, well-drained soil all the way from Argentina to Ecuador in the Andes mountains. This plant, which is native to high altitudes (6000-9000 feet), survives in frigid conditions as low as 15 degrees Fahrenheit.

A minimum temperature limit normally means “when dry,” however this is not the case with San Pedro! Most cactus receive rainfall during their warm season and are therefore prone to failure when exposed to a wet winter, even if they can tolerate much colder temperatures in their natural habitat — but San Pedro, inside its mountain habitat, receives ample rainfall while still enduring quite cold temperatures. As a result, it is among the greatest contenders for a Mediterranean climate (like ours in the Bay Area). It only requires a little extra summer water to thrive.

San Pedro’s history is entwined with Andean culture and traditional medicine, with archaeological evidence indicating that healers used the plant for religious divination as long as 3000 years ago.

We adore Echinopsis pachanoi for its garden ornamental applications. It excels as a strong vertical design element, fitting into small spaces and growing 10-20 feet tall. A single stem will split and branch, forming a staggered clump of well-balanced fast-growing spires. San Pedro is largely unspined, which increases its utility around patios and pathways, in pots, and even indoors in a sunny position.

Because these plants are native to greater rainfall areas, they can withstand overwatering and have strong drainage, making them easier to mix with other plantings and allowing designers to contrast them with softer species. In fact, especially during the dry months, these cacti prefer even watering. The only issue we have is yellowing, which occurs when people stop watering completely, plant in thick clay or never fertilise. San Pedro, more than any other cactus, adores fertiliser and will repay you with rapid growth and vitality.

The large white flowers, found in profusion on mature specimens, are perhaps the most remarkable feature of Echinopsis pachanoi. These fragrant tubular blossoms are about ten inches long and wide! The extraordinary size is due to the huge hummingbirds that pollinate them in the Andes, though they are also pollinated by moths. Because pollinators are nocturnal, these massive white flowers open at night, making San Pedro an excellent contender for a moon-viewing party in your new garden!

How to identify San Pedro cactus?

It’s one of the most often asked questions, and it’s accompanied by photographs of a diverse range of unrelated columnar cactus species. Because the answer is frequently no, we created this guide to provide a definitive answer. Whether you’re new to the San Pedro cactus or cacti in general, at the end of this book, you should be able to drive past a cactus at 50 km/h and know exactly what you saw.

Before we dive into the specifics of identifying the San Pedro cactus, you should be familiar with some key vocabulary.

Ribs are projecting rows that stretch vertically from the crown to the plant’s base. Spines and flowers are always found near the ribs. Cactus ribs keep the plant cool by forming shady troughs/pockets between them and increasing the surface area for heat dissipation.

Areoles are little, spherical lumps that grow centrally down the ribs and can be pale or black. From the areoles, spines sprout in bunches. The areoles also produce flowers.

Spines are the sharp needles that develop from the areoles and are self-explanatory. Cactus spines are modified leaves that have evolved over time to protect themselves from herbivores while also minimising moisture loss as compared to ordinary leaves.

The San Pedro cactus contains 6 to 8 circular ribs at all times. The troughs/pockets between the ribs are normally shallow and only dip deep into the cactus when it is extremely dehydrated.

The areoles of the San Pedro cactus are light/white. They frequently have a furry/fuzzy appearance. Above each areole, there is usually a notch, or “eyebrow,” as it is also known.

San Pedro spines are normally small (2-5mm), point upwards, and are a pale yellow colour. Each areole typically has 6 spines.

San Pedro blooms are large, white, and, like most other cacti, bloom at night.

San Pedro will produce “pups,” which are essentially branches, as it matures. These puppies originate towards the base of the cactus and grow only vertically. At first view, an old San Pedro appears to be a dense thicket of numerous cacti rather than a branching tree.