Home What is Core Sync on Mac in 2022?
Technology News 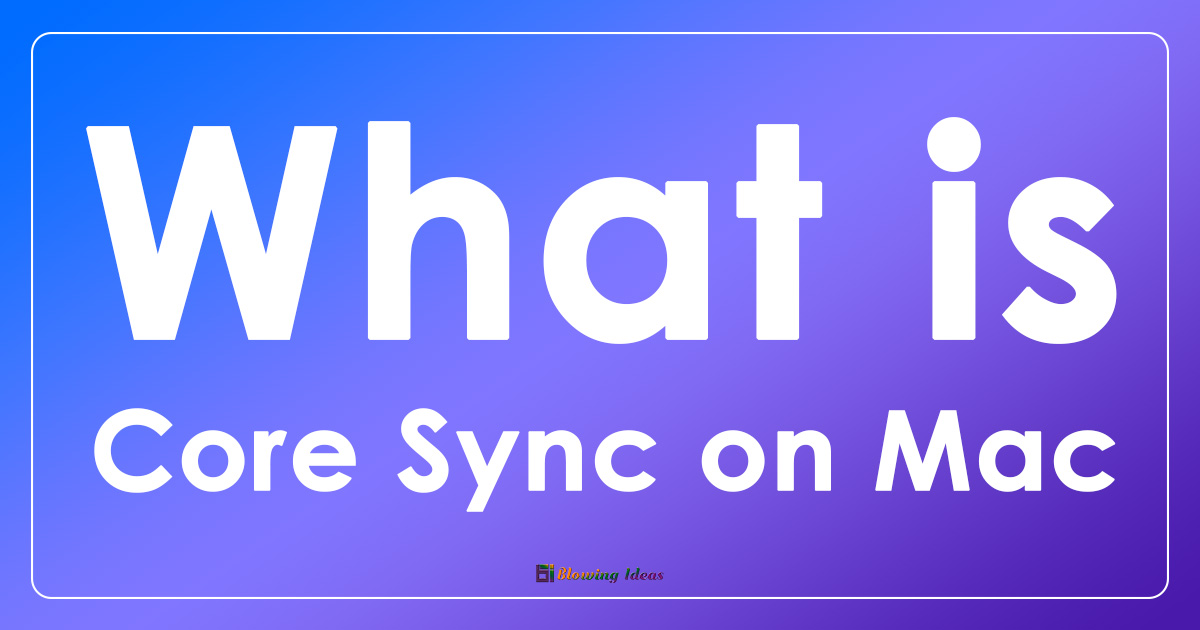 What is Core Sync on Mac in 2022? Mac computers have long been known as systems that appear to use relatively high-end components that go into identical, unified Apple designs. Many individuals who prefer Macs appreciate how the iOS operating system works, the smooth integration of systems or processes between multiple devices made by the company, and the relative security these machines may provide to their customers. How programmes run in the background on Mac and iOS software can also be beneficial.

Some people may notice Core Sync appear on their machines and question what it is. In most circumstances, it will request access permissions to files or other resources on the Mac. This may cause some folks to get confused or concerned, so we’ll go over Core Sync in greater detail below. Furthermore, we may discuss how safe it is, whether you can delete it, and what problems your system may suffer if Core Sync is running in the background. What is Core Sync Mac?

What is Core Sync on Mac?

Core Sync is one such procedure, and it is a background software that various Adobe services may employ. Its objective is to allow your Mac to share data with Adobe’s Creative Cloud.

Creative Cloud provides access to web-based services, apps, and other tools that can assist you in using the company’s products for image, video, and graphics processing in general. The procedure, as the name implies, syncs what you do across numerous Adobe applications. As a result, customers who use Adobe Creative Cloud may do so without interruption, regardless of the device they use.

Adobe’s Creative Cloud is intended to be a central location where anyone who wants to conduct video editing, photography, graphic design, painting, or simply drawing can access many of the company’s latest programmes or services. You can use the Creative Cloud to work on social media as well, so think of it as a bigger set of apps that you might use for nearly any creative effort.

The Core Sync function is a component of this cloud service. In addition to the benefits listed above, Core Sync can enable your Adobe products to sync documents or things created in Illustrator, Photoshop, and other programmes.

Most users should feel secure using Core Sync. While no programme is absolutely free of the possibility of intrusion, harm, faulty updates that can create bugs, or other issues, Adobe developers have spent a significant amount of time working on Core Sync.

The procedure works in tandem with the company’s own Creative Cloud, and it may be required to access some of the features you may want to use. However, some permissions must be granted in order for Core Sync to function properly. Most notably, the application may request access to certain folders in which you keep data, however, this is largely owing to the application’s desire to sync the contents of such folders between devices.

Adobe is a company that was founded decades ago and has risen to prominence in the technology industry as a reliable creator of software that frequently focuses on areas of graphic design and related pursuits. Since its inception, it has established and managed operational centres in various regions of the world, and it employs thousands of individuals to work on its initiatives.

In short, people should consider it a reliable corporation that strives to produce items that are both useful and safe. While certain of Adobe’s processes may have issues in particular upgrades that need to be corrected, there is little evidence that running things such as Core Sync on your Mac is actively damaging. There might be secondary issues about how these operations may momentarily impair a computer’s hardware, but we will address these in a later section.

Can I Delete Core Sync on My Mac?

Some users may have difficulty removing Core Sync from their PCs. Downloading and using trial versions of Adobe products is a popular example.

In such cases, it is usual for the company to wish to install Core Sync as part of the process so that you can access all of the features you may want to try during the trial. However, some users may notice that they remain on their PCs after removing any of the relevant Adobe products.

While this may not be a concern, it does mean that when Core Sync runs, it may consume unnecessary system resources in the background. There is no point to use Core Sync on a system if there are no Adobe products or features to sync.

Attempting to eliminate the process from your Mac without following the appropriate instructions may result in system instability. Fortunately, there is a technique to see if Core Sync remains on your Mac after you have removed Adobe apps. Furthermore, Adobe has supplied some guidance on how to remove it.

How Do Safely Remove Delete Core Sync on Mac?

If you tried certain Adobe products but decided they weren’t for you, you most likely deleted them from your Mac when the trial time finished. Even if this is the case, background processes such as Core Sync may continue to function normally.

When this occurs, it is recommended to follow the company’s own instructions for eliminating software leftovers. Adobe has offered consumers its own tool, the Creative Cloud Cleaner, to help with this.

As previously stated, Core Sync works with a component of Adobe’s Creative Cloud to keep your work current across all platforms. If you ever need to get rid of it, the company has a convenient gadget developed for exactly that reason. Adobe suggests utilising the Creative Cloud Cleaner to completely erase files associated with its products.

With that said, there are a few precautions you should take before using the tool. Most importantly, ensure that you have backups of any files you don’t want to lose stored somewhere else. Adobe also provides a log collector, which should be run before the cleaning.

The log collector is a helpful first step that can assist the company’s support personnel later if there is an issue with the removal, such as unanticipated data loss. After that, start the tool by doing the following steps:

It is vital to understand that Adobe only provides easy downloads for the two most recent Creative Cloud versions. If you are working from or require access to older versions, be sure you have the ability to install them from a hard disc before deleting the programmes from your Mac.

How To Fix Core Sync High CPU Usage on Mac

The first step is to ensure that your application is up to date. There could have been a recent update or patch that was supposed to fix the excessive CPU consumption on Core Sync. If everything appears to be running on the most recent version, you may be dealing with a forged copy.

To resolve this, follow the steps above to completely delete it and then reinstall the most recent version from Adobe’s website.

Core Sync may show that it is using a very high percentage of your Mac’s CPU in some instances. In fact, it may use nearly the entire CPU capacity, getting within one or two percent of the maximum.

It may remain in this state for as long as it is open, consuming nearly all of the central processor’s resources. So because the CPU is working so hard, your Mac computer’s fans may be running at a high, audible speed practically continually.

Core Sync may be using a significant percentage of the CPU during the syncing procedure. However, if you are consistently receiving heavy usage, it may suggest that the application is not real or that there is another fault that the organisation must address first.

It is crucial to note that a non-genuine copy of Core Sync is not inherently harmful, but it can still cause instability concerns by using an excessive amount of the CPU’s resources.

Adobe has several fantastic solutions that can assist with practically any graphics-related task you can think of. With so many possibilities, having the Creative Cloud at one’s disposal to keep everything simplified and backed up is invaluable.

Core Sync is required for these functionalities to function, but it can have its own drawbacks. Although it is safe to use, it may attempt to consume too many system resources in some instances. You can try some of our solutions to see if the problem goes away.